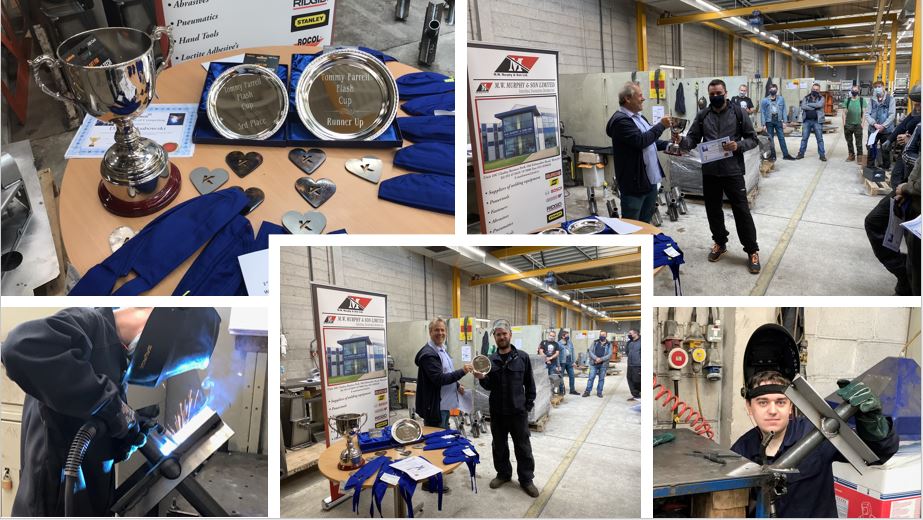 Last weekend we held our inaugural "Tommy Farrell Flash Cup" welding competition! This now annual event is an opportunity for our welders to display their skills in a competitive but fun format. The tournament is the brain child of Keltech's new in-house welding trainer Jeff Imrie.

Jeff a Master Welder with a career spanning over 20 years joined Keltech in recent months having been a highly regarded welding educator in the UK. (Global Educator of the year award 2016- 2017 American Welding Society (AWS)

When Jeff approached Keltech senior management with the concept and the idea of creating a Trophy for the outright welding winner immediately the name of the late Tommy Farrell was mentioned as a someone the competition should and would be dedicated to.

Tommy is remembered fondly in Keltech by all that knew and had the pleasure of working with him. His impact and legacy can’t be understated. Tommy was not just a world class welder in his own right but also inadvertently an excellent weld trainer. Tommy’s warmth towards younger less experienced members of staff was always on display throughout his tenure. Countless welders at Keltech learned their trade from Tommy Farrell, his patient and caring approach was a perfect antidote when helping others hone their MIG & TIG skills.

Although its now some years since Tommy graced the Keltech welding hall many of his then young (now not so young) proteges remain with the company, many in senior positions. « From little acorns mighty oaks grow » Tommy Farrell we salute you, thank you for everything.. Ar dheis Dé go raibh a anam.

Competition was fierce but friendly last Saturday. The standard not only from our welders with many years service but also from our recent weld academy graduates was superb.

The competition was a roaring success, with many new welders currently in training at our welding academy and with recruitment ongoing it looks like next year will be a hotly contested event, we already can’t wait….