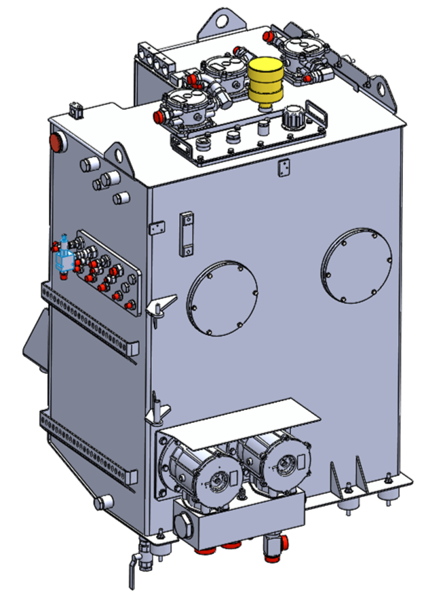 Launched in 2015, the KT360 Fluid Dynamics department is situated on site at Keltech. This customer centric engineering team has been created in response to market demand for the pursuit of efficiency and performance in Fuel and Hydraulic systems. Through years of experience and research, the team have developed best in class approaches. In doing so, KT360 Fluid Dynamics have enabled Keltech to become the partner of choice for renowned OEMs throughout the world.

Conducted over a 4 week period, the KT360 team carried out several onsite pain diagnostics with the OEM customer. The pain for the customer in this case was a recent spike in hydraulic component failure experienced in the field operation. Warranty costs related to the hydraulics system of the machine had almost trebled in a 2 year period, the brand was also suffering as loyal customers that depended on machine reliability were beginning to become weary of the unreliability.

On investigation, the failed hydraulic components showed minute contaminants present in the fluid. It was suspected that these were the cause of the majority of failures. When analysed, the DNA of these containments ranged from machine build and assembly containments to other particles that most likely entered the system during the machine’s operation.

Based on machine type and expected operating conditions the KT360 team specified a NAS 9 cleanliness code recommendation for the hydraulic system (otherwise known as ISO4406). Achieving NAS 9 throughout the hydraulic system came with new challenges. For example, the team measured test samples of hydraulic oil direct from the manufacturer and to their surprise, a NAS 11 level of cleanliness was the best test result found. Alternative brands were trialled but it became apparent that hydraulic oil manufacturers themselves were failing to meet the NAS 9 level of cleanliness.

Through this investigation, the KT360 team developed a deeper understanding of 3rd party factors at play in the hydraulic system and set about creating robust solution.

Based on mathematical calculations, the team determined that the entirety of this particular hydraulic system would need to be filtered every 95 seconds during machine operation. This standard of filtration would drastically reduce the amount of contaminants entering hydraulic components.

The team analysed the current reservoir tank. A CFD test was carried out on the existing reservoir – this test is used to predict turbulence, sloshing and fluid path. The performance of the original reservoir tank could be described as inefficient at best. The fabrication had been designed from a structural view point but from a performance point of view it was rife with fluid dead-spots, heat dissipation issues, de-aeration issues etc.

The team then set their sight on the hydraulic filtration componentry that would be fitted to the reservoir tank. In partnership with our chosen supplier, all performance and efficiency metrics were reviewed. Off the shelf componentry was first sampled, suitable cost effective options were selected for parts such as gauges, sensors, filler necks and caps, etc. However when it came to the filter option, it was agreed that a bespoke solution was required.

This bespoke filter design solution is something which is unique to our partner, their flexible approach to manufacturing means machine tailored filter solutions can be made in high or low volume at a competitive cost base which are specifically designed to suit your machine (unique customer branding also available).

It is important to note, that for the duration of this project the customer was involved and informed every step of the way. With the new integrated reservoir tank now designed, real life trials were conducted. The customer manufactured two demo models for field trials which would be kept under close observation for a 6 month period. Both demo models would run in identical conditions during this period. Demo model 1 used the current hydraulic reservoir tank and circuit whilst demo model 2 was fitted with the KT360 design version.

The project had been a success. The end customer modified all new builds to use the KT360 designed integrated reservoir tank. 1 year since the serial introduction of this system and we have had the feedback that “warranty claims related to hydraulic component failure are drastically reduced, practically to the point of non-existence”. There has also been some interesting by-product benefits; there has been a significant weight reduction to the machine, a significant reduction in the space required to house the hydraulic reservoir tank and finally the cost of the reservoir tank has reduced as it is now approximately 50% smaller than the original model.